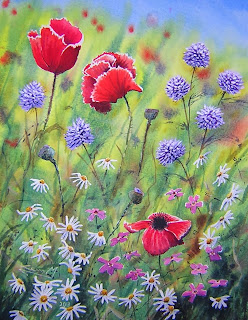 I do hope I will be forgiven for repetition when I have explained my situation. The health issues previously mentioned, far from going away, have taken a decided turn for the worst. The fact is, they are beating me at the moment and, for the past few weeks have prevented me from doing anything at all. This picture was completed not long after the two previous ones. I've done nothing since. I was slightly unhappy with the last two as I felt that the actual poppies lacked a little definition considering they were the title source for the paintings and I've tried to rectify that issue here. It was the last time I meaningfully took up a brush. I have no more inspiration or creative energy and because of this I am taking a blog break in the hope that coming events will give me a chance to recover. I go back into hospital in a few days so that they can reverse a procedure carried out in the summer which, far from helping, has made things much worse. It's true I was feeling some dis-comfort back in the spring ( "dis-comfort" is a much loved term among health specialists and is used when they want to lie about how much pain you are going to experience), but no one could have foretold my situation as it stands today. Equally, it is impossible to foretell how I will be afterwards. Having said this, I will be back. I love blogging. I love sharing my work and, even more, appreciating other people's work. I am disappointed, frustrated. Furious.   Returning to the poppies, I felt that maybe it would be appropriate to post another tribute to these iconic flowers of the battlefield after all. Not far away, a war continues to rage. The forces of good and evil, oppression and freedom, discrimination and justice, clash and wrestle for ascendancy. One man has tipped the balance in favour of humanity's more positive side. Now, finally, he rests, having endured more than one human being should ever have to endure, having achieved more than one human being should ever be asked to do. You have earned your rest and set a standard for all other so called world leaders.   Sleep well Nelson Mandela.
Posted by Kev's Art at 05:34

Email ThisBlogThis!Share to TwitterShare to FacebookShare to Pinterest
Labels: Poppies in Watercolour