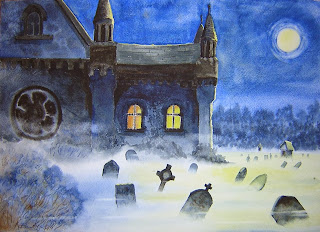 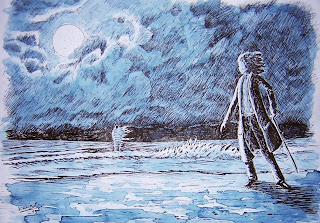 I don't expect these to be to everyone's taste but there, Halloween is what it is. The graveyard scene was done a fair while ago now, it's one of those from a pile which normally would stay firmly put away, I've re-touched it here and there and posted it purely due to the season. The pen and wash picture is the result of another sleepless night and is inspired by that brilliant short story "Oh, Whistle and I'll Come to You My Lad", by the incomparable M.R.James. Both pictures are from my dark and dusty  imagination. I had a terrible tussle with the figure in "Whistle" and I'm shocked at how rusty my drawing skills are at the moment. More practise required!!  It's been a strange few days. Due to lots of encouragement from my better half, I took some work to a new gallery in town in the hope that, if I caught them on a good day, I could maybe sneak one or two pictures onto their walls. They wanted NINE!!!! Elated as I was, reality soon reared it's pumpkin head. The deadline is very near and none of them are even mounted let alone framed. Then there is the fact that I've done nothing so sensible as to paint pictures which will fit into "off the shelf" mounts. Oh no, not little me.  Literally hours after arriving home I went down with a ghoulish viral infection. I am now in the process of cutting mounts and finding frames to fit.  And the clock face lears and clicks it's teeth, tick tock tick.......  A frantic but happy Halloween this is turning out to be and, as is usual where life is concerned, not without it's witches brew of irony. Wishing you all a real scream of a season!!!