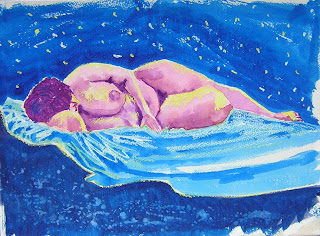 This is from a few years ago now. It was done at a life- drawing evening class but was not influenced purely by the model. It's also derived from a dream I had when I was very ill in hospital some time earlier, the impression of which has stayed with me to this day. It is also influenced by the scientific theory that everything in the universe, including our own bodies, is constructed from stardust, ie basic elements. That all sounds a bit deep but I had a lot of fun doing it!!
Watercolour and wax crayon.
Posted by Kev's Art at 05:26

Email ThisBlogThis!Share to TwitterShare to FacebookShare to Pinterest
Labels: Stardust